I’ve been putting off writing. Putting it off in the same way that I have been putting off many things that I generally love: writing, reading, running, crafting, cooking…to be honest today and yesterday were the first times I had written in my journal in over a month. I cannot tell you the last time I went for a run. Not sure what’s happening here…

I have been doing other things—I’ve been practicing yoga. I’ve been swimming. I’ve been recovering from a mouth surgery. I’ve been watching scary movies in the middle of the day that way the demons can’t get me. I’ve been flirting with old men to get better tips. I’ve been drinking afternoon IPAs at the brewery. I was able to watch two of my dear friends get married this weekend. They made an intensely beautiful commitment to one another.

the state or quality of being dedicated to a cause, activity, etc..

an engagement or obligation that restricts freedom of action

What about that second definition isn’t terrifying? Why do I have this fear of settling down? I’m afraid to stay in one place but I’m also afraid of the repercussions of not committing to something. So I made a large financial and time commitment for January. I bought a one-way plane ticket to the Bahamas. I committed myself to a month of Karmic Yoga study at an Ashram. I’ll be staying HERE, practicing meditation, learning more yoga, and working without pay for five hours a day.

This is not enough.

Really. Going to the Bahamas is not ‘committing’ to anything.  Some people are saying this is just a long vacation, it’s not. I think it is more than that. I’m planning on learning a lot, I’m planning on being me and absorbing as much as possible. Hopefully I’ll meet some rad people who I can learn from, hopefully I’ll be that rad person that some people meet and are able to learn from.

This September, in order to prepare, I’m going to commit to a yoga practice every single day for the month. I’m unable to go somewhere to practice—I truly live in the middle of nowhere and only have my feet and bicycle for a vehicle, so my living room will be my studio, my matt will be place of worship, and my DVDs will be my instructors. I anticipate my roommate laughing at my ass in the air during downward dog, I anticipate not wanting to do it some days, I anticipate forgetting to do it, thinking I don’t have time to do it—the important thing is that I try. I intend to try.

Sometimes trying is harder than doing. Deciding to do something is harder than the actual following through, following through and accepting that idea can be the best feeling. I’m afraid to fail. I’m afraid that on September 3rd I’ll say “Screw this, where’s the couch?” but today I’m committed, today I’m planning on making it the 30 days, perhaps even longer, maybe I’ll continue this on for another month. Who knows?!

If you’d like to join me leave me a comment and we can support each other virtually! Or Private Message me on my facebook page, we can do this together. We can commit and unify as a team! Now, I’m going to go buy a new yoga dvd so I have a few options next month! Any DVD suggestions would be awesome! Any support from you would be awesome. 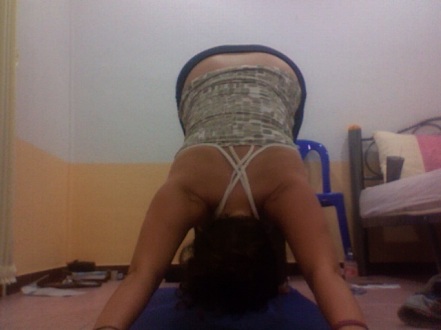 Old pic from yoga in Thailand

One thought on “Commitments and Intentions”